The surrealist Hollywood film that shocked the bourgeoisie

With a Rotten Tomatoes rating of 26%, Barry Levenson's Toys (1992) WATCH HERE is one of the most hated big budget films of modern times. The reviews were not only dismissive but even angry, with the sort of anger that dada and surrealist art was intended to arouse in the bourgeoisie.

Perhaps that was the reason for of its abysmal failure, both critical and financial. The film's art and its ambience were deliberate echoes of the paintings of René Magritte and Andy Warhol, but the depth of the parallels was unexpected and took a while to emerge. For a mass audience, conventional expectations of a happy family story were aroused and then violated.

The film begins and ends with a joyful Christmas spectacle, played out in front of a live audience, but in between is a fairy tale as grim as those set down by the eponymous brothers. Near the beginning there's a brief jarring moment when we see a car driving through a barren landscape--a hint that it's not going to be just an Xmas treat for the kiddies--but soon we're back to a heartrendingly beautiful song.

But its mood is deceptively ambiguous:

If I cannot bring you comfort
Then at least I bring you hope
For nothing is more precious
Than the time we have, and so
We all must learn from small misfortunes
Count the blessings that are real
Let the bells ring out for Christmas
At the closing of the year

The entire script is so dense and so ambiguous, especially the songs, that I would love to have a copy of it! (Cheap copies of the DVD, which includes English subtitles, are available from Amazon, and well worth it!)

After the opening song and dance, we are abruptly hurled into a weird fantasy in which the world of humans and the world of toys interpenetrate. Both the plot and the sets are surrealist in the extreme, changing from moment to moment in totally impossible ways. It gets more and more fantastic, until finally humans and toys are indistinguishable; in fact, one of the major characters turns out to be a robot, constructed to keep a human character company.

In the course of the action, the opening flat board city set becomes the scene of progressively more violent action, until at the end the old-fashioned airplane suspended from wires, on which Santa arrives in the opening sequence, becomes a key prop in a final deadly battle.

There are two scenes which must be deliberate echoes of Edgar Allen Poe. In the first, as in The Pit and the Pendulum, the walls gradually close in on a toy design conference taking place in a lab until the participants must climb onto the table. WATCH HERE

The second is at the end of the film. The very human robot Alsatia has her head severed by the Sea Swine but, like the decapitated Signora Psyche Zenobia in Poe's A Predicament, she keeps chattering away. "I miss my heart," she says plaintively. WATCH HERE

The film's central theme is a highly detailed and accurate anticipation of the interlocking psychologies and technologies of drone warfare and mind control. Watch the pivotal scene HERE.

Along the way there are passing references to various human foibles, fixations and fallacies:

37' Foods mustn't touch each other!

97' Education in the mind set of war

The film's happy ending is unrelated to the plot and takes us back to the stage and the audience where we began. Our revels now are ended! As in an opera, the dead come back to life for the curtain call. The plot's actual resolution is not this conventional stage conclusion but the denouement in which the elaborate interrelated network of sophisticated weaponry ends up destroying both itself and its creator.

The film is an extended fable, embodying a Biblical moral: Whatsoever a man soweth, that shall he also reap. One should view it with no more expectation of realism than if it were a tale by Bunuel or a Bugs Bunny animated cartoon. And try to forget that the whole world hates it! 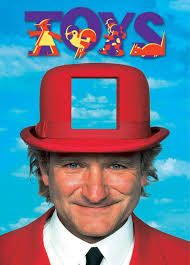