In a country rife with galloping inflation (and everything else), Slow Food’s Osterie d’Italia is an invaluable guide to gastronomic integrity at reasonable prices. I’ve found its recommendations to be reliable, but there is a subcategory of modest perfection—restaurants that have adopted neither modern shortcuts nor modern prices, identified by a rarely-awarded little snail at the head of the listing:

Among the Palermo entries, Osteria Paradiso is the only eating place thus honored. It was only open for lunch and was so far from our hotel that I had no hope of our tight schedule accommodating a meal, but a late-morning visit to Villa Malfitano opened the possibility of popping around the corner to Paradise. 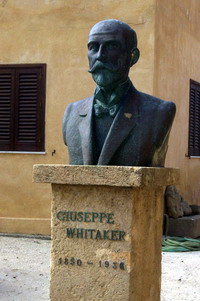 This Villa and its extensive gardens were begun in 1886 by Joseph Whitaker, grandson of Ingham Whitaker, an English wine merchant who had set up both shop and ship-building in Sicily. To compete with Malmsey, a wine whose exclusive trade was in the hands of a rival, he invented Marsala, yet another heavy syrupy drink designed to appeal to manly English tastes. (Several fortified varieties, including Port, owe their existence to the market manipulation of English entrepreneurs in pursuit of their robust preferences.)

Like so many inheritors of great wealth, Joseph spurned commerce and devoted himself to intellectual pursuits, particularly archaeology, ornithology and botany. Seeking a sandbox of his own to play in, he bought the island of Mozia, where he excavated ruins going back to the Phoenicians in the 8th century BC. 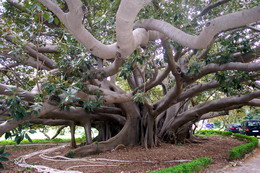 For his park in Palermo he imported rare trees from all over the world. (The one on the left is a banyan tree or a ficus magnolioides, depending on which impeccable authority you believe. It's claimed to be the largest in the world.) Today, these magnificent specimens seem largely to be looking after themselves and the park closes its gates to the public at one o’clock, so lunch at the Paradiso was virtually a foregone conclusion. 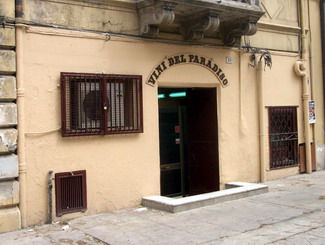 We easily found the simple tasteful façade. Inside we were greeted effusively by il patrono, who soon made it clear that, as in Il Cambusone, it would be best to place ourselves entirely in his hands. (If you’re in heaven, you’d better eat ambrosia with nectar and like it!) And so we bravely set out to demolish the prescribed antipasto, pasta, fish and dessert, together with a boccetta of local vino bianco.

The first two courses were what we had come to expect: first caponata, muscles and cuttlefish, then pasta with a delicately flavored seafood sauce. (Mary summoned up enough Italian to tell our host that we had eaten caponata six times in five days, and t

hat this was the best.) Then came our  secundi, as fine a trio of grilled seafood as one could wish for. We’d seen the bright-eyed orata (daurade, as the French call it—an essential ingredient of bouillabaisse) and trigghia (red mullet) on display, and the gamberoni had been twisting about in the refrigerator case minutes before. The first of these three, though small, was almost in a league with the sensational besugo parrilla (grilled red sea bream, a related species) we had once eaten in the Basque fishing port of Getaria. The red mullet was likewise done to perfection, and was of a variety not exasperatingly riddled with tiny bones like those we’re accustomed to in London. 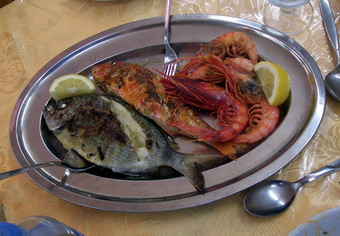 As for, the gamberoni, only a gifted poet could do justice to their succulent juices. I was tempted not only to suck the heads but to chew them down to irreducible shell and bone. If any of you readers enter this earthly paradise and waste a single scrap of your prawns, I will know about it and follow you to the ends of the earth to avenge their dishonor! (NOTE: I understand that the Sicilian Mafia is looking for a successor to Bernardo Provenzano. Don’t bother to phone, I’ve more important things on my mind.) 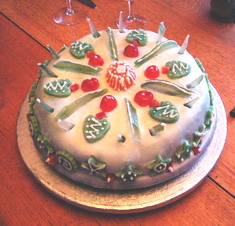 The crowning glory of the meal was the great Cassata Siciliana, an iced layer cake of sponge and ricotta. (The picture at the left is of one that Mary later made for my birthday.) Such a bald description is like calling caviar a pot of pickled fish eggs. In its full glory a dressed-up Easter cassata looks like the one pictured on the left (which is not the one we ate). Pretending to be virtuous, I had refused dessert, but a taste of Mary’s made me regret my empty gesture. She was so taken with its ineffable lusciousness that she asked for another piece to take away, which il patrono put in a little tray and carefully wrapped in foil, adamantly refusing payment, and then shook her hand as if she'd done him a favor. Mary understood him to say that his nephew exports them. If there is a London dealer, our healthy domestic diet may be seriously threatened. 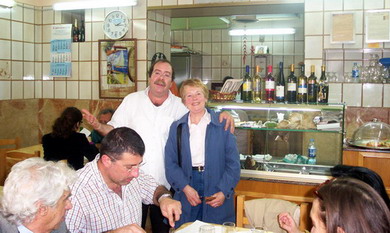 Before we left, I snapped a photo of my wife under the affectionate arm of the magician whose magic wand had indeed wafted us to paradise. Only an hour before he had been a total stranger; now he seemed a candidate for sainthood. It’s moments like this for which from time to time we forsake our happy home.

Osteria Paradiso [Vini del Paradiso] Vis Serradifalco 23, Palermo. There is no telephone, but most of the diners don’t linger over lunch, so it is highly unlikely that you’ll have to wait long, if at all, for a table.