Over the past couple of years Le Balzar has been the scene of a tempest in a beer mug. For a century it was a comfortable academic hangout, slow to change either for the better or for the worse - up to World War II it refused to serve unescorted women. (In Provincetown in the 1940s a local fishermen's bar compromised by means of a sign in the window reading BOOTHS FOR LADIES.) In 1969 Waverley Root commented, "On a day when all you want is to eat adequately without making any fuss about it, this is a reasonably pleasant place to do it in." 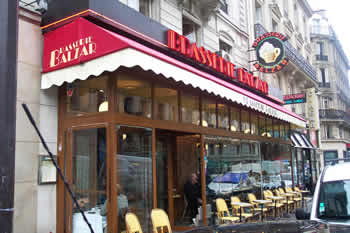 And then Adam Gopnik of the New Yorker arrived in Paris and was captivated by everything in sight. Le Balzar, he proclaimed, was the greatest restaurant in the world. When the Flo group took it over (earlier in its history it had been part of the Lipp empire), Gopnik made high drama out of the local habitué's organized efforts to keep everything exactly as it was. The outcome was a qualified success for tradition, which Jeffrey Steingarten dismisses with the sniffy comment, "I have read that habitués of the Balzar in Paris are relieved that . . . nothing has changed. I am surprised that this would make anyone glad."

Dropping in for lunch without the bias born of long association, I found it a thoroughly bourgeois institution - solid, respectable, unpretentious, ticking over comfortably in an unostentatious manner. I came deliberately scruffy, electing to sit in the respectable linen-laid dining area rather than in the café tables facing the sidewalk, but caught no hint of supercilious hauteur from the waiter who showed me to a table. I came early, just after opening, and the tables were soon full of well-suited gentlemen and expensively dressed women. There were a few probable tourists with American accents, but none of the coach contingent. Waiters were helpful with those whose French wasn't up to the menu, without seizing the psychological advantage.

I opted for two simple courses, skate wing and tarte tatin. The former was as it should be, with generous black butter and a plethora of capers, not too vinegary; the latter was perfectly caramelized on a good substantial crust. This being a brasserie, I drank a glass of beer. (If only French beer outside Alsasse had a fraction of the character of German, Belgian or English!) 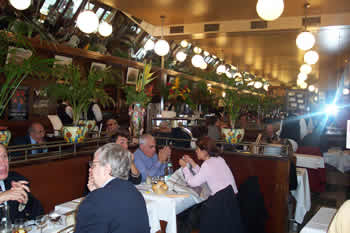 So what's all the noise about, either for or against? This is a smoothly run establishment which still, three decades later, precisely meets Root's criteria - yet another ordinary Paris eating place which, if transported to London or New York, would be The Talk of the Town.

Back to the beginning of this review