Bofinger has a long his 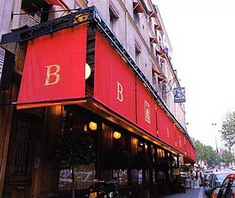 tory behind it. From its opening in 1864, it was the first place in Paris to serve draught beer, whose continually flowing suds lubricated its early success. In 1919 it was expanded into the adjacent buildings, and the present design, dominated by the sweeping curved staircase and the florally ornamented stained-glass dome, was jointly created by the architect Legay and the interior designer Mitdgen. It went from strength to strength and in 1925 was declared by chef des chefs Curnonsky to be “one of the best brasseries in Paris”. It went off form after W.W.II but was bought in 1982 by a consortium who restored the gloss both to its interior and to its cuisine.