The majority of sex offenders that hanker after some throbbing, sweet-moaning physical but not necessarily coital relation with a girl-child are innocuous, inadequate, passive, timid strangers who merely ask the community to allow them to pursue their practically harmless, so-called aberrant behaviour, their little hot wet private acts of sexual deviation, without the police and society cracking down upon them. We are not sex fiends! We do not rape as good soldiers do. We are unhappy, mild, dog-eyed gentlemen, sufficiently well integrated to control our urge in the presence of adults, but ready to give years and years of life for one chance to touch a nymphet. Emphatically, no killers are we. Poets never kill.

Ours, we proudly tell ourselves, is an age of sexual enlightenment. Sixty years ago when Vladimir Nabokov, already a famous and respected author, attempted to find an American publisher for Lolita, he was refused by all five that he approached. The book ended up between the notorious green text-only covers of the Olympia Press in Paris, along with William Burroughs, Samuel Beckett and Henry Miller. It was to become Maurice Gerodias’ most famous publication.

But if Nabokov were to approach respectable English language publishers today, would he fare any better? In England, the recent exposure of multiple paedophile rings at the highest social and political level has taken Humbert Humbert's outrageous apologia (above) out of the innocent realm of ironic fiction. At the top of the black list, both for notoriety and for sheer quantity, is Jimmy Saville (photo above), whose violations of children of all ages, both alive and dead, merits an entry in the Guiness Book of Records. This in turn led to the exposure of paedophile rings among the leaders of government, industry and finance, many of whose members had been trained in sado-masochism in some of Britains' finest boarding schools. (George Orwell's explosive memoir, “Such, such were the joys”, was dropped from the first British edition of his collected essays.)

Lotita has become so sanitized by familiarity and by Stanley Kubrick's Peter Sellers-dominated farce that it is impossible to grasp the enormity of its challenge to our entire moral code, particularly in this country in which No Sex Please, We’re British ran for six years in London's West End. To realize its psychological impact when it first appeared, imagine a novel in which the narrator is the sophisticated commander of a Nazi concentration camp who describes his sexual ecstasies as the smoke pours out of the chimneys.

And so, if submitted today, Lolita would no doubt be accepted by an avant-garde publisher, but it is so outrageous and so politically incorrect that reviewers would think twice before giving it a favourable notice. Not only would the narrator's thoughts and behaviour be totally unacceptable, but the ironic conflict between his abstract, idealistic and inhibited passion and Lolita’s casual promiscuity would arouse even greater indignation. When Humbert shares a bed with her the first night, having unsuccessfully attempted to drug her into unconsciousness, he restrains himself from molesting her. But when she finally awakens at six a.m., “it was she who seduced me.” Furthermore, he learns that she had been having it off with Charlie, a helper at the girls’ camp where she had spent part of the summer. For Lolita, sex is only a game that she’s just learned how to play.

As for their relative ages, Humbert calls our embarrassed attention to the fact that, in most cultures throughout history and in some even up to modern times, when a girl has reached adolescence the very concept of child molestation has very little meaning.

But in the light of today’s paedophile enormities, age is generally considered very important indeed and the nymphet as aggressor is totally unacceptable. In a recent book club discussion of the novel, no one was prepared to think of poor little Lolita as anything other than a helpless victim. Does the narrator tell us otherwise? Then he must be lying! For the respectable reader, the book must be mentally bowdlerized, thus reducing a complex and provocative work of fiction to a moral fable. 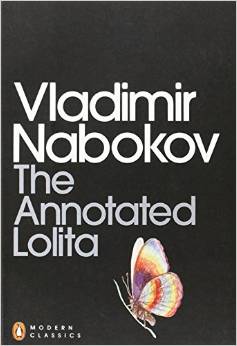 What did Nabokov intend to accomplish with such an outrageous narrative? If we want to know why he wrote Lolita and what he wanted us to think about it, we have the benefit of a critical edition with an introduction and notes that are two-thirds as long as the novel itself. Furthermore, Professor Alfred Appel’s The Annotated Lolita was written with the author’s collaboration and ultimate approval, and so we are able to get the official answer to any number of questions, including the big one: did he intend it to be pornographic? No, says Nabokov unequivocally. In fact, he insists, the relationship between the two main characters is not even its primary subject matter. The entire novel is really about the creative process.

You could have fooled me! Nabokov hated Freud and psychiatry, and no wonder. Lolita was his third attempt at a fictional treatment of sexual intimacy between an older man and a nymphet. (Nabokov himself was the first to use the word in this provocative sense, which would have told his analyst a great deal.)

The narration is awash with intimate psychosexual detail, but it does not, by at least one common standard, qualify as pornography.  Professor Appel, the editor of this edition, tells us that, when he was stationed with the American army in France after the war, on his first visit to Paris he went browsing in a Left Bank book store and returned with a copy of Lolita. A barracks mate recognized the Olympia Press covers, which had enclosed many a notorious pornographic novel, and called out, “Hey, let me read your dirty book, man!” “Read it aloud!” another shouted, and he began at once with the first page, skipping the introduction.

”Lolita, light of…my life, fire of my…loins. My sin, my soul…Lolita. The tip of the tongue…taking…a trip… —Damn!” he yelled, throwing the book against the wall. “It’s God-damn Litachure!”

Humbert Humbert is inexorably submerged in an ethical quagmire, but Nabokov denies any interest in its moral implications. “I am neither a reader nor a writer of didactic fiction,” he says. “Lolita has no moral in tow.” It is not even a satire, he insists, but a parody. Satire has a moral, a message. It is a sermon, in Nabokov’s own words mere “Literature of Ideas—huge blocks of plaster that are carefully transmitted from age to age until someone comes along with a hammer and takes a good crack at Balzac, at Gorky, at Mann.” (His own novels, of course, rise far above such “topical trash”—that is the very phrase with which he damns his inferior fellow novelists.)

Nabokov characterizes parody as a game, a complex intellectual exercise like chess or lepidopterology. (He was of course a master of both.) His ironic (sarcastic would not be too strong a word) stance—indeed, his total lack of involvement, in which he shows no sympathy with or respect for his characters, his adopted country, or his audience—all these work to dehumanize the entire narrative.

Professor Appel devotes many pages to tracing the multiple hidden cross references with which the novel is replete. It is as complex, he demonstrates, as James Joyce's Ulysses. But to what purpose? If this is just an elaborate game, it is ultimately a 316-page cryptic crossword. 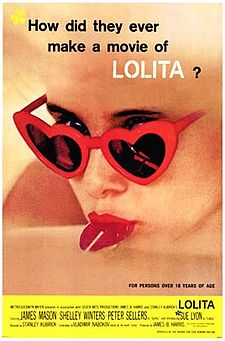 Detailed documentation of this assertion could be as long as The Annotated Lolita itself, but I'll spare you the ordeal. In the course of re-reading the novel, I went back to the two films that were based on it. The first and most famous, directed by Stanley Kubrick, Lolita (1962) was twisted totally out of shape by Peter Sellars’ endless self-indulgent improvisations, so overwhelming that it has been widely suggested that the film should have been retitled Quilty.

But the second film, made some years later, Lolita (1997), followed the novel’s plot very closely indeed. It did not, however, adopt Nabokov’s ironic tone of address. In this film, the characters were portrayed with such understanding, such depth of feeling that I became totally involved and immediately watched it a second time. After immersing myself in this sad narrative and its agonized ending, I returned to the novel. It was like sitting down to a Michelin 3-starred menu degustation, a gastronomic tour de force, in which every dish had been liberally seasoned with bitter aloes.

Or rather, a mock banquet for a film set, designed to autodestruct when the cameras stop rolling. Professor Appel tells of an improvised puppet theatre he and his wife once cobbled together to amuse their children.

Carried away by [my] story's violent climax, [I] knocked over the entire theatre...For several moments my children remained in their open-mouthed trance, still in the story, staring at the space where the theatre had been, not seeing me at all. Then they did...[a] double take and began to laugh uncontrollably....at those moments of total involvement in a nonexistent world, and at what its collapse implied to them about the authenticity of the larger world, and about their daily efforts to order it and their own fabricated illusions....[T]hey saw how easily they could be tricked and their trust belied, and the shrillness of their laughter finally suggested that they recognized the frightening implications of what had happened, and that only laughter could steel them in their new awareness....

When I visited Vladimir Nabokov...I told him about this incident, and how for me it defined literary evolution and the response which he hoped to elicit from his readers at "the end" of a novel. "Exactly, exactly," he said as I finished. "You must put that in your book."

Was this what was really going through his children's minds? No matter. Nabokov confirmed that it was what he wanted to happen to his readers. It is an appropriate reaction to a world in which, as he wrote in the opening and closing sentences of Speak, Memory,

The cradle rocks above an abyss, and common sense tells us that our brief existence is but a brief crack of light between two eternities of darkness.