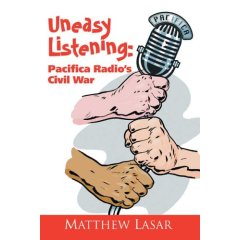 This review was commissioned by American Studies in Scandinavia, for whom I had reviewed Matthew's first volume in 1999; but on submission the present editors asked for substantive changes in content and emphasis which I was unwilling to make. I publish it here as I wrote it, with the added benefit of metalinks.

KPFA-FM Berkeley, America’s first listener-supported non-commercial radio station, went on the air in 1949. Half a century later, reviewing Matthew Lasar’s Pacifica Radio: The Rise of an Alternative Network for American Studies in Scandinavia, I wrote:

Although [pacifist poet and broadcaster Lewis] Hill and his co-founders did not intend that KPFA should be directly controlled by the community, its openness and informality led its listeners to presume a proprietary interest—it sounded democratic. This contradiction would be at the heart of all the attempted invasions and palace revolutions which over the years would make the Pacifica network a perpetual battleground.

The history of this “fine old conflict” [Thank you Jessica Mitford!] shows us yet again how difficult it is to induce analytic thought in a mass audience that wants merely to be entertained. In his second volume of Pacifica history, Uneasy Listening: Pacifica Radio’s Civil War, Lasar acknowledges this dilemma, but with a diplomatic ambiguity:

A dialogue emerged between two narrative explanations competing for the attention of the public: a democracy narrative and a relevance narrative. Both had their roots in tensions that went back to the very beginnings of the Pacifica organization and could be found in Lewis Hill’s public writings and letters. The debate between these two narratives generated widespread attention as the Pacifica fight became a metaphor for the anxieties many progressive Americans felt about the rightward drift and consolidation of the media. [pp290-1]

Lasar took this as his organizing theme. The “rightward drift” meant that he was unable to interest a mainstream American publisher, and so he ultimately signed up with a British house. He emailed me last year:

Europeans find Pacifica fascinating, especially in contrast to the rest of U.S. politics. I've been interviewed by the BBC, Deutsche Rundfunk and French TV about Pacifica over the last two years. But nobody in the United States ever calls me.

As Lasar explains in his acknowledgements and list of donors, he had no publisher’s advance to support his research, and so he ingeniously appealed for support from prospective readers in much the same manner as the network he was writing about. Since European intellectuals are more interested in Pacifica’s David-and-Goliath struggles with the media giants than in its erstwhile cultural programming, he shrewdly cast it as a politicized epic. In true Homeric fashion, he launches into his tale at its dénouement, the 1999 Battle of Berkeley, before going back to its beginnings. This was the moment at which I had concluded my review of his first volume:

KPFA as we knew it is off the air. Even as I write…e-mail bulletins are coming through every couple of hours telling of burgeoning demonstrations and mass arrests outside its Berkeley studios.…Who knows what will happen next?

In his new book, Lasar answers my rhetorical question, fleshing out the bare bones in meticulous and riveting detail. He avoids the loaded words and skewed interpretations of its protagonists; I can’t imagine any future historian sifting the evidence with a more exacting impartiality.

BUT ALAS, military history cannot waste its time on the bloodless confrontation of ideas; instead it must concentrate on the tactics and the casualties. Lasar’s narrative often conveys the breathless excitement of the trenches, but war buffs will find that it lacks a certain frisson--there are lots of wounded psyches but no fatalities. As the backroom plots continually recycle, the story begins to read like an endless reality-TV pirate game in which the protagonists are made to walk the plank and then try to get voted back on board.

In Lasar’s first volume, he gave ample space to a representative selection of KPFA’s seminal broadcasters. This time, absorbed in the coups and countercoups, he rarely steps out of the conflict zone long enough to note what’s going out over the airwaves. In 430 pages of never-ending guerrilla warfare, there’s no space for the stations’ once-unique arts programming. You would not know from this narrative that, while the multiculturalists were engaged in mutual evisceration, two internationally respected radio broadcasters, one in music programming and the other in drama and literature, were working productively and synergistically at KPFA for an uninterrupted quarter century.

BETWEEN 1969 and 1992, Music Director Charles Amirkhanian produced an enormous number of legendary programs, such as the 1970 George Antheil festival which restored to the active repertoire works that had lain forgotten since their original performances. In 1981 he coordinated a national satellite broadcast of the New Music America Festival, transmitted live across the country on eight consecutive nights from the Japan Center Theater in San Francisco. It introduced so many influential new composers that it would not be hyperbole to call it the First Armory Show of modern American music.

Amirkhanian’s involvement with the avant-garde took him outside the conventional bounds of music programming. Prior to the U.S. Presidential election of 1984, he persuaded KPFA’s sceptical management to install a microphone on the street in front of the station, freely available to the public every day for half an hour. Instead of the predicted chaos, it quickly evolved into Vox Pop Vérité, a spontaneous self-monitoring mini-festival of commentary, poetry, music and improvisatory drama. By the fourth day, all three U.S. television networks were covering this unprecedented event—a radio station had dared to offer the masses freedom of speech as guaranteed by the First Amendment!

You might think that such a happening was at least symbolically relevant to KPFA’s half-century struggle for public access, but Amirkhanian appears only once in the Uneasy Listening index, when he is made the butt of a quip that “when the station did not broadcast classical music, it broadcast people talking about classical music.” [p117]

ERIK Bauersfeld, KPFA’s equally celebrated Drama and Literature Director from 1962 to 1991, doesn’t even rate a joke, unless you count the glib dismissal by one of Pacifica’s grossly overpaid consultants: when asked to identify “the best time to schedule radio drama”, his laconic reply was “1938” [p189], the year that Orson Welles’ Mercury Theatre on the Air began broadcasting.

After stepping down as a KPFA department head, Bauersfeld continued as Director of Special Projects until 2004. Among his most remarkable accomplishments, funded by the National Endowment for the Humanities, were audio productions of eight plays by Eugene O’Neill, directed by José Quintero. Another long-term project, now approaching completion, is a series of three largely autobiographical audio compositions by Lawrence Ferlinghetti, sponsored by the Bay Area Creative Work Fund.

IN LASAR’S final chapter, after the listeners have gained substantial representation on the network’s governing board, he concludes that “ Pacifica radio is surely one of the world’s most democratic public media networks.” [p404] There is nevertheless a lingering suspicion that the victors have been handed a poison chalice. “The second worst thing…has happened,” one campaigner reports to Lasar. “We’ve won.” [p369]

Meanwhile, the network had succumbed to an attack of acute commercialism, from which it would never recover. “The tactics are almost point for point those of propaganda,” says Bauersfeld, who has set out the symptoms of the disease. One by one, these may be relatively harmless, but when they combine into an all-pervasive syndrome, the result is intellectual poverty and “aesthetic undernourishment”. In recent years Pacifica has exhibited them all: glitzy packaging; seamless strip programming with rigid adherence to schedules; short segments that assume a limited attention span; background music behind speech, including “stings” between news items; an NPR-inspired policy of focusing on the outcome of events rather than their causes; programming that is determined by popularity polls rather than editorial judgement; and constant repetition in order to induce a trance-like state of blind acceptance.

Is this an unfair summary? KPFA is available for online listening, and so in the course of writing this review I submerged myself glassy-eyed in hours of pop; I listened to the ramblings of an old geezer high on gospel music; I winced at stumbling deliveries of the news, which in one instance petered out into the muttered complaint, “This isn’t written very well.” One of Pacifica's most distinguished broadcasters now does his best to sound reassuringly incoherent.

Such media mindlessness is by no means confined to the Pacifica stations. Bauersfeld’s massive project on Henry James, which had already gathered the support of a whole pantheon of scholars, was finally turned down by The National Endowment for the Humanities on the grounds that it was “out of sync with the realities of the marketplace….NPR will not invest time, money or personnel to market or promote it because there is no potential return on this investment.” Richard Hofstadter’s Anti-Intellectualism in American Life needs constant updating.

AS WITH so many cultural phenomena, the most important results of Pacifica Radio may well be its by-products. Other Minds, Charles Amirkhanian’s “global new music community”, has acquired KPFA’s enormous tape music library, to which he contributed so much. It is gradually being transferred to digital format for free online listening, thus rescuing it from the ultimate indifference of the station that had once made it possible. [See 1970 George Antheil festival above.]

But most important of all may be Democracy Now!, a spin-off from WBAI in New York which survived Pacifica’s regular efforts to dismember it. Amy Goodman and Juan Gonzales, still its presenters/producers after ten years, conduct long uninterrupted interviews (the sort that KPFA was once famous for) with some of the most important news-makers and best informed political analysts from around the world. When the U.S. corporate media give such people an occasional hearing, they are hardly allowed to speak in complete sentences, let alone paragraphs.

Not only is the series regularly scheduled by over 500 independent U.S. stations; it is also available online for listening and/or watching on demand. For those who lack the time or the technology, there are complete transcripts immediately and freely available. The programs make up an ever-expanding archive, an encyclopaedic source of the facts that the world’s news-fabricators work so hard to conceal. If Lew Hill were to hear but a single episode, he would know for certain that his life had not been wasted.

The quotations and paraphrases of Charles Amirkhanian and Erik Bauersfeld are from interviews conducted by the author in 1991, 1994 and 2006.

For my other Pacifica-related articles, look here.