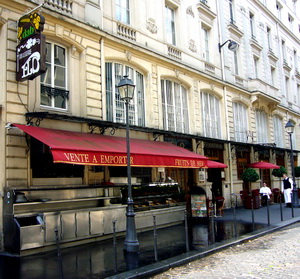 Like so many French brasseries, Flo owes its origins to the German occupation of Alsace. After its foundation by a refugee publican in 1886, it merged with the Brasserie Hans in 1901. In the Germanophobic lead-up to World War I, it was patriotically wrecked by a Paris mob, whereupon its latest owner, an Alsatian named Floderer, stoically rebuilt it and patronymically changed its name from the provocative Hans to the more ethnically ambiguous Flo.

During the May 1968 student uprising  it was bought by yet another Alsatian, the 27-year-old Jean-Paul Bucher. Ironically, the success of this now quintessentially Parisian institution was 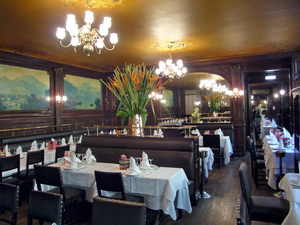 assured by the massive custom brought by the coterie of Julian Clerc, star of the American musical Hair. Tired of having to refuse bookings, M. Bucher gradually took over some of the most famous brasseries in Paris, ultimately including La Coupole, Balzar, Le Boeuf sur le Toit, Bofinger, Terminus Nord and several others. Purists may protest at this uniformity of ownership and ambience, but it’s very likely that without his intervention these historic institutions would have lost their distinctive architectural features or indeed their very existence. He became a sort of one-man National Trust, whose centralized administration was arguably less pervasive than the latter’s twee Laura Ashley-esque gardens and gift shops. 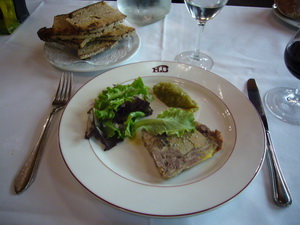 Coming for Sunday lunch at opening time, I had the magnificent space all to myself. I roamed freely about, camera in hand, like an oil sheik about to add it to my portfolio. Settled back at my table with the carte, I resisted the copious fruit de mer whose cost could have mounted up like Las Vegas wagers and went for the 24.50€ menu whose op 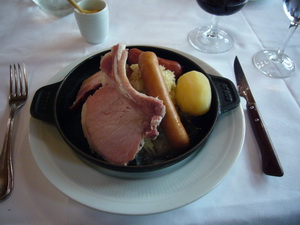 tions included Marbré de canard au foie gras, compotée de rhubarbe and Choucroute Spécial, the dish on whose reputation institutions such as this were founded. The tartness of the rhubarb was a happy complement to the rich fatty terrine, while the choucroute included ample portions of good saucisses de Frankfort and Montbéliard, poitrine fumée and carré de porc. The sauerkraut was well cured and sweet, with none of the vinegary aftertaste that charactarizes inferior examples.

Like all of what were once M. Bucher’s brasseries, Flo was restored and has been kept to a high standard of craftsmanship and authenticity. If you visit any one of them during off hours, you’ll have a glorious museum all to yourself.

NOTE: It is actually located in Cour de Petites-Ecuries, a parallel cul-de sac just to the south.

Back to the beginning of this review